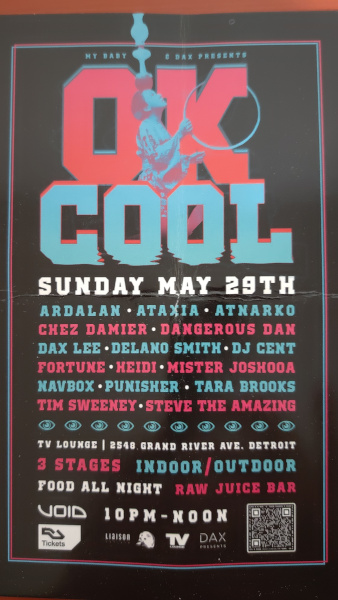 There are all sorts of various after parties that take place all over Detroit during Movement once the festival ends at midnight. I saw a flyer for this one at an ice cream truck at the festival. Many of them — like this one — go until noon the next day!

I also got a tip about a different party (No Way Back at Tangent) and decided to try to get into that Sunday night. Unfortunately, they weren’t selling tickets at the door until 5 AM, and I didn’t feel like standing around waiting for 5 hours. Should have bought in advance. Oh well. To save on cab fare, I decided to just walk back downtown since it was only 3 miles.

Unfortunately, I got lost and ended up walking 40 mins in the wrong direction, then had to backtrack another 40 mins. Eventually I saw the GM building in the distance and just headed towards that, knowing that would at least get me back in the vicinity of downtown and my hotel.

The party featured on this flyer was less than a mile from my hotel, and since it was ‘only’ 4AM by this point, I decided to check it out. It goes until noon after all!

Man, sure glad I did. What a great time! 3 dancefloors — 2 of them outdoors — and awesome music. The highlight was probably dancing outside until the sun came up (and then another hour or 2 more). I also ended up meeting a DJ from Chicago (Space Bandit) who told me about another party later that afternoon he was spinning at.

I didn’t make it to noon though, I was beat — especially after my pointless 3 hour walk earlier that night. I ‘called it’ at around 8AM, went back to the hotel and got some rest before venturing out to the place Space Bandit told me about (Elephant Room) later Monday afternoon.

That ended up being super fun too! Space Bandit’s set was great, as well as Raedy Lex who I met along with some other cool people. I also got some good shuffling footage there. Afterwards, we headed to Hart Plaza for Day 3 of Movement!